Trustpilot
Go Back
Filter by:

I had the opportunity to meet George Osborne, Chancellor of the Exchequer this week at Number 11 Downing Street. The meeting was about the Nothern Powerhouse, but I wanted to speak to him specifically about the new proposed Dividend Tax.

My thoughts on the new Dividend Tax is that is extremely unfair, and it is a tax on entrepreneurship. Many small and medium sized businesses reward their director/shareholder via dividends. But this is not aggressive avoidance, and it certainly isn’t tax evasion. Anyone who currently remunerates themselves via dividend does not get tax relief on pension contributions or gift aid .
I feel it is a betrayal of his pre election promise not to increase income tax.

But the Chancellor has announced this new tax, and so if he is willing to risk the wrath of the electorate, then I imagine it will be implemented. Although I did implore him to reconsider.

And if he is to implement it, then it should be done on a basis which is fair for all taxpayers.

When I met the Chancellor I mentioned that currently there is no mechanism for a private limited company to report to HMRC the dividends it pays. Under the current income tax regime there is no additional income tax to pay for a person receiving dividends unless they are a higher rate taxpayer. Therefore this lack of formal reporting to HMRC probably doesn’t reduce the tax yield significantly. However now that the Chancellor is planning to bring in millions of additional taxpayers into the new Dividend Tax regime, I predict that without a formal reporting mechanism the tax yield will be very low, or certainly lower than it could be.

In my experience as a Chartered Accountant advising hundreds of small businesses, a number of SMEs remunerate themselves via salary (processed through payroll and reported to HRMC via RTI) and dividends on a monthly basis.

I note that one of the drivers for Payroll RTI was Universal Credit. By significantly lowering the income threshold where taxpayers pay Dividend Tax, the Chancellor is bringing in taxpayers who also qualify for Universal Credit. Therefore it appears irrational to have online reporting to HMRC of income from one source (ie salary processed through a payroll) and not another (ie dividends).

Without a formal, robust reporting mechanism, backed by a penalty regime, a number of unrepresented taxpayers, or taxpayers who are represented by accountants who are not fully compliant with legislation may simply just ignore the new Dividend tax.

There is a precedent for reporting dividends to HMRC. Under the former Advanced Corporation Tax (ACT) regime, companies used to report dividends paid to shareholders, on a quarterly basis using a form CT61. The ACT regime was abolished by Gordon Brown. Interestingly that coincided with more and more director/shareholders remunerating themselves via dividend.

The form CT61 still exists (now used just to report interest paid to individuals), but given the move to online tax accounts, an online reporting tool which reports when dividends are paid would be more suitable.

I think the reporting mechanism should be separate to RTI, but could be based on similar reporting technology. Shareholders are not necessarily employees, and even in small businesses the two are very distinct.

I note that the Chancellor has threatened to abolish tax returns and hopes that taxpayers can have realtime access to their tax liability via online digital tax accounts. Of course, this won’t work for many SME director/shareholders who remunerate themselves via dividend, unless dividend income is reported to HMRC in a uniform way.

If the Chancellor wishes to maximise the yield from this new tax, I suggested to George a formal reporting mechanism whereby each private limited company reports the dividends it has paid to its shareholders on a quarterly basis. This should be done using a simple online form which links to the taxpayers digital tax account.

Of course in order to do that, companies and their advisers need realtime access to their accounting records. And the best solution for that is Xero. Xero provides realtime access and anyone using Xero will easily be able to comply with any new reporting requirements.

Whether George implements a formal reporting mechanism for dividends remains to be seen. But he did raise his eyebrow when I mentioned it … 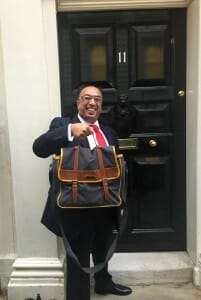